This factsheet should help you to plan your own bike and climb adventure to the volcano „Chachani“.

Chachani is a 6000+ meter volcano close to the city of Arequipa in the south of Peru. There are lots of agencies offering trips to Chachani. For about 280 Soles (90 USD) you can get a two day trip to Chachani. The price is very cheap, but we didn’t like the fact that the trip schedule is (in terms of acclimatization) asking for troubles… On day one you ride up to 5000m by 4×4 vehicle and hike for 1-2 hours to the base camp on 5150m. There you set up camp and are likely to suffer from acute mountain sickness, because the ascent from Arequipa (2300m) to over 5000m is just to much for most people.

We took a bus to Puno and got of at the road toll station north of Chachani. (see map) There are a few shops and restaurants. You can get water there, although the taps are often frozen in the morning, so get your water before…

We arrived after dark and spent the first night camping close to the drop off point at 4000m. The next morning we went back to the shops to fill our water bottles and get a cup of coffee. (you better take the water in the evening…)

We took 11 Liter for two persons and it worked out fine. You don’t want to be able to find water until you reach Arequipa. 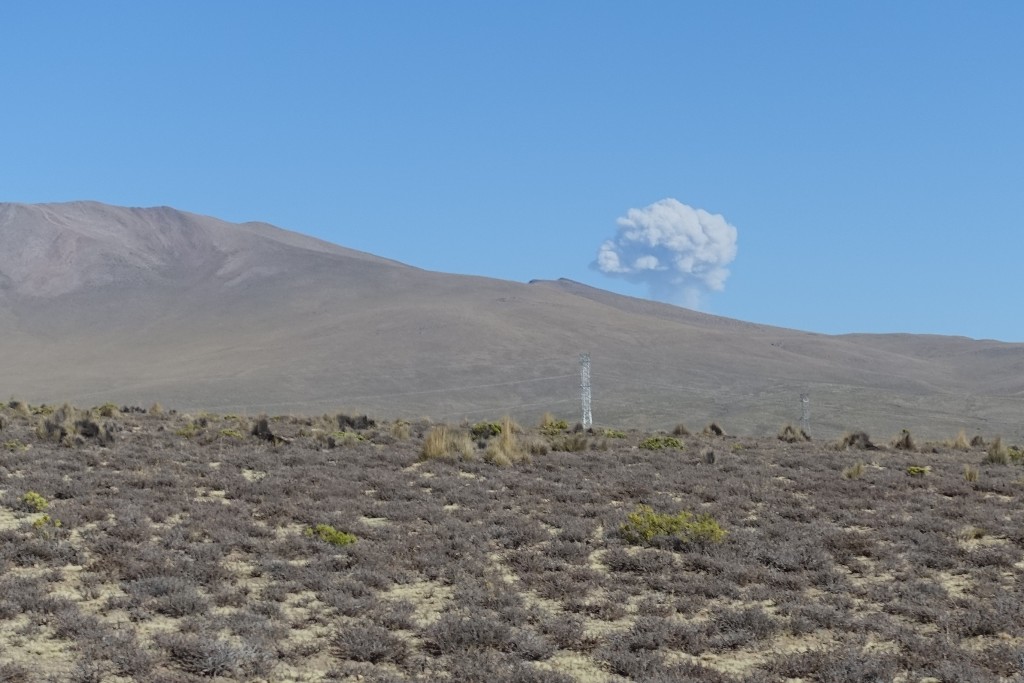 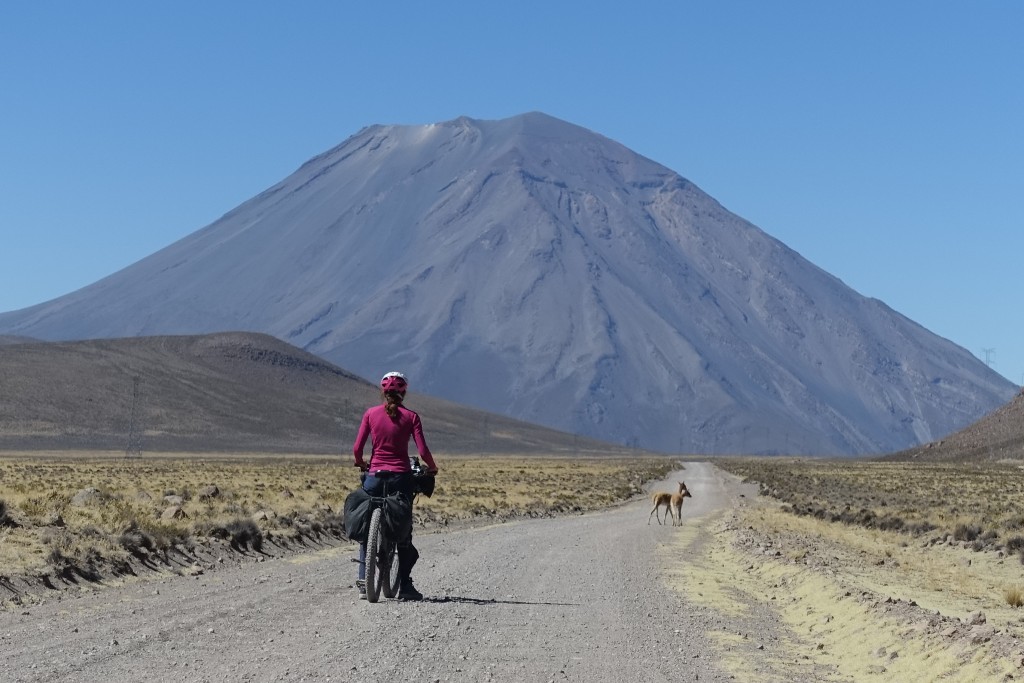 We had to share the road with quite a few Vicunas. The first 15km we rode on a quite ok gravel road. 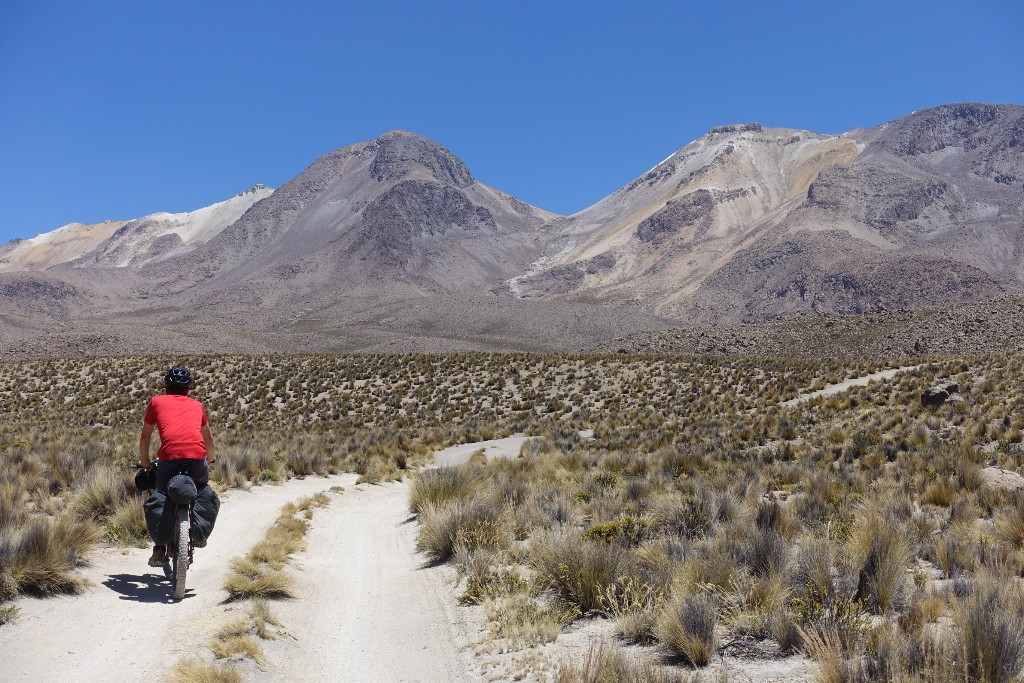 Most of it was ridable, but expect 1 to 1.5 hours of pushing. The riding isn’t easy… Quite steep and the weight of the water doesn’t make things easier. 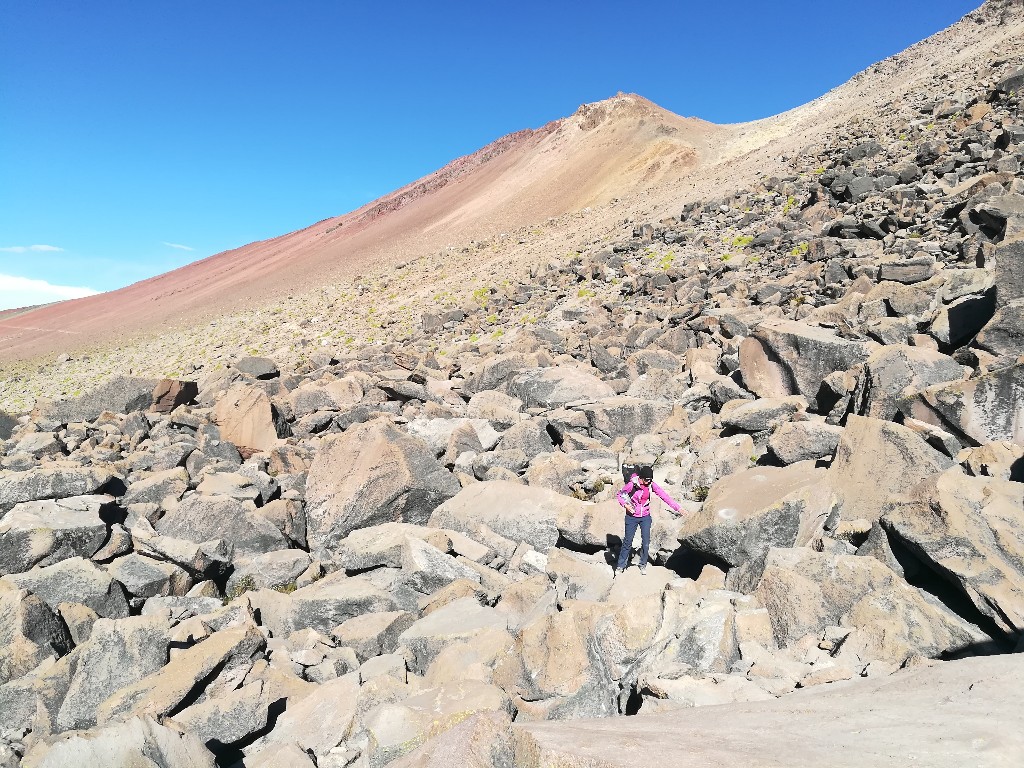 After we did hide the bikes on 4900m we had to walk for another 1.5 houres to the base camp.

Heavy backpack on the way to the base camp. 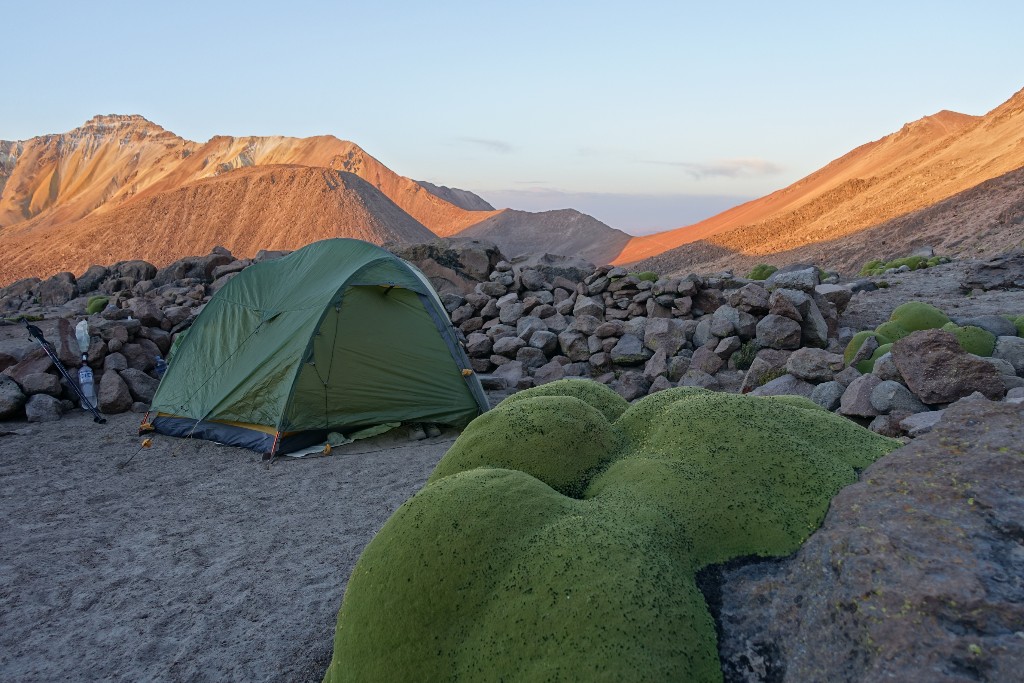 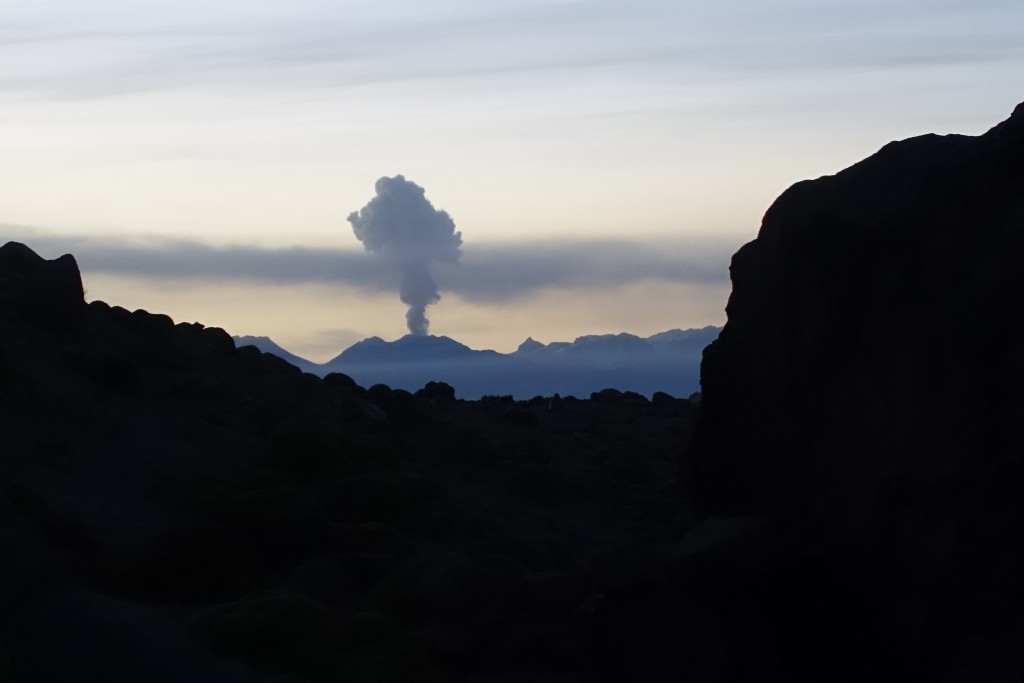 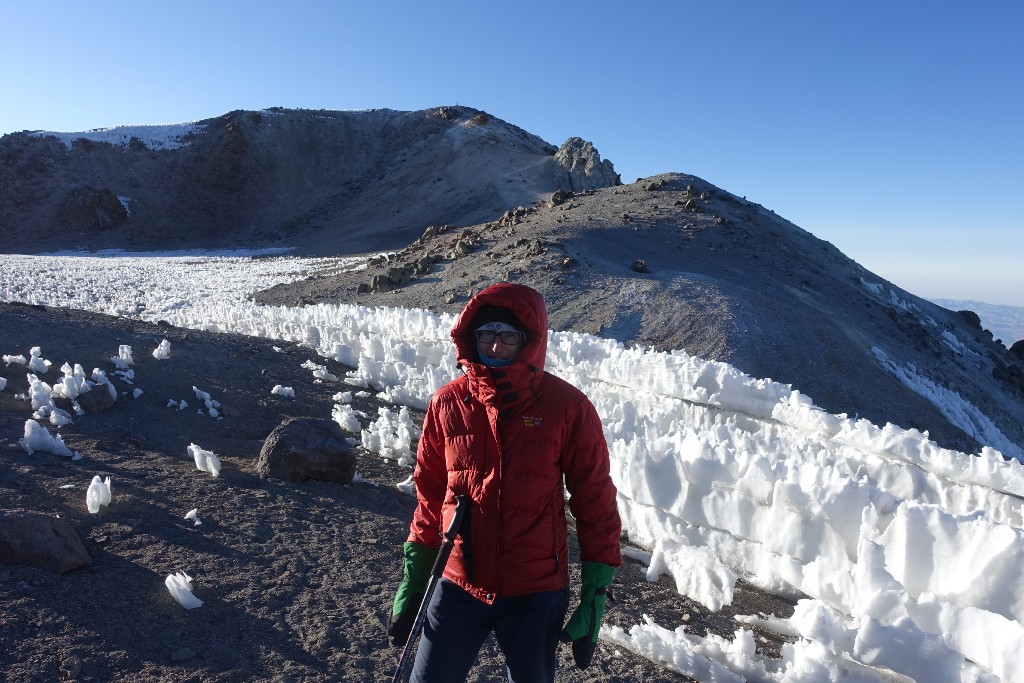 We started at 3.00 a.m. and were very happy to reach the warming sunshine at around 6.30.
I wouldn’t suggest to start so early. The guided groups start at 1.00 a.m. but mostly because they want to be early back at the pick up point – so the driver who dropped of other groups doesn’t have to wait to long…

We reached the summit after a bit less than 4 houres.

On the summit. Great views, but still cold. There is a little bit of snow and ice around, but no need to use crampons. (dry season – September 2018) 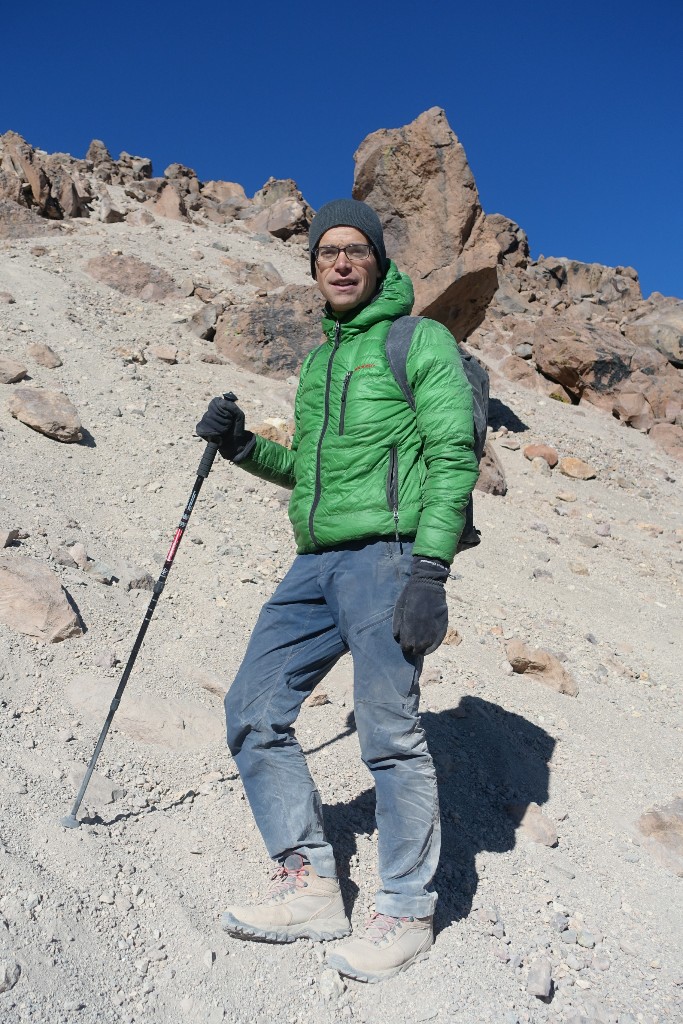 Walking/sliding down the sandy slopes.

After a very long day we were defenitely hungry enough to eat this great burger and a big dessert.

Biking to the basecamp is defenitely doable, but expect sandy roads and a bit of pushing. Plus-tires make things easier and you should try to pack as light as possible.

Water is very scarce. There is NO water between the start point and the outskirts of Arequipa.

The climb to the summit is more like a trekking. The challenges are the altitude and the cold.